The overall winner of Ironman 70.3 Colombo, Olivier Godart, is on an impressive winning streak. Will this be his year to top the podium in Kona?

Luxembourg’s Olivier Godart didn’t just dominate the men’s 40 to 44 age group at Ironman 70.3 Colombo, he crushed the entire field, finishing the race in an impressive 4:06:06, almost 18 minutes ahead of 25 to 29 champ Davide Rossetti.

“It was really a fight of survival out there,” the champion said after the race. “It wasn’t really pretty, but you just have to see it through and in the end I was lucky enough to win.”

After finishing just off the podium in Kona last year, Godart has been taking out his frustration on 70.3 fields ever since, continuing an unbeaten streak in his age group over the half-distance he started at the end of 2016. He was 18th overall at Ironman 70.3 Bahrain and 25th overall in Dubai, but was the top age group athlete at both. He won a short course race at home last weekend, then dominated the day in Sri Lanka.

Thanks to the environment at home in Dubai, Godart was more than ready for the hot conditions in Colombo.

“There’s no heat in the world that can surprise me,” he says. “There are days in August when we have 52 degrees (Celsius) in the shade.”

Despite his impressive 70.3 racing record, Godart won’t be at the world championships in South Africa.

He will be heading to South Africa, though, to try to get himself another shot at the podium in Kona, after which he’ll continue his “retreat” from the sport.

“I am in semi-retreat,” he says. “I won’t compete any more in the middle east. I had my last competition in the middle east last week. I want to quit when the game is most beautiful. I’m at my peak and I want to leave the game when I am at my peak. I will maybe focus a bit more on swim-run and maybe do one Ironman a year for fun.”

Based on his version of “fighting for survival” after yesterday’s domination in Sri Lanka, it’s hard to imagine that Godart could ever do any race “for fun.” It will, though, be fun for us to watch his progress through the rest of 2018 and even more fun to see if he can crack that podium in Kona in October. 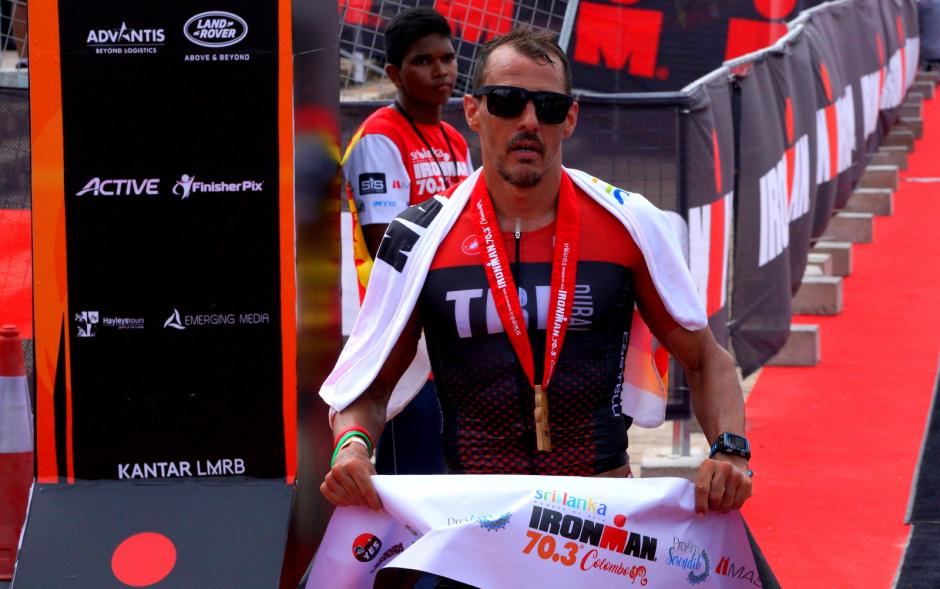